I've said it before, I'll say it again

Here's to the new year; may it be a damn sight better than the last. (It would take some doing to be worse than 2016.)
Posted by TrooperBari at 9:27 PM No comments:

I'll be darned if I can put my finger on why, though. 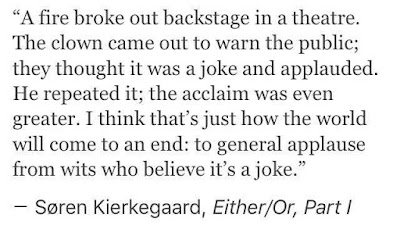 Posted by TrooperBari at 10:11 AM No comments:

"It'll be FINE! Just give him a chance!"

"Well, golly. Folks sure do seem to have a bee in their bonnet about the new president. He hasn't even taken office yet -- what could they possibly be protesting?"

You could just write them off as sore losers... but you'd be badly mistaken. Maybe it's people reacting in horror that enough people were OK with voting for a racist, sexist, xenophobic bigot that a racist, sexist, xenophobic bigot got elected president. News flash: Voting for a racist who openly advocates racist policies makes you complicit in racism, no matter how noble you believe your intentions to be. And if being called out for enabling racism makes you angry or uncomfortable, maybe take a moment and consider the effect your actions have had on those whose lives have become exponentially more difficult thanks to what you've enabled.

Read more »
Posted by TrooperBari at 8:45 PM No comments:

So, that happened. Now what?

I'm seeing calls to "unite", to "heal", to "come together as a nation" under the new president. Fuck that, and fuck anyone who thinks shrugging their shoulders and going with the flow will make things better. I refuse to "unite" behind a man who got himself elected on a campaign of attacking Mexicans, Muslims, women, LGBT people, the handicapped, people of color, immigrants, and others. I will not passively sign on to the aims of a government that seeks to roll back the Affordable Care Act, repeal the Obergefell decision and Roe v Wade, and make the United States a hostile environment for women and non-whites.

Odds are not all Trump voters are racist, sexist, xenophobic bigots -- some of them, I assume, are good people. But if their actions help a racist, sexist, xenophobic bigot become the leader of the country, the result is the same. Actions matter, not words or intentions. Half the country voted in favor of fear, hatred, and white supremacy. I count women, Muslims, LGBT individuals, African-Americans, Latinx, and other minorities among my friends -- am I supposed to just stand by and watch as the new regime takes over and starts eliminating the rights and protections they fought so hard to secure? Do I just go about my merry way, under the assumption that I -- a white, heterosexual American male -- will not be inconvenienced by my country's government?

Read more »
Posted by TrooperBari at 4:27 AM No comments:

Confession of a reluctant Hilldawg

I'll make this short and sweet, because there's already an overwhelming amount of election coverage online. I have voted -- by mail, so there's no sticker to prove it, but the Nebraska Secretary of State's website says they've received and accepted my ballot. It's just that I was asked several times today, so I figured I'd go ahead and reveal my vote.

I voted for Hillary Clinton for president. No, I'm not particularly pleased with how everything has gone. Preserving the status quo is part of why American democracy feels so sclerotic right now, and Clinton is nothing if not the personification of business as usual (the whole "being a woman" thing aside). She is far too hawkish for my liking, and there is a long record of behavior that suggests that even if she does not consider herself above the law, she certainly acts thusly. There are real concerns that her close ties to Wall Street will hamstring any meaningful financial reform. Clinton is a very flawed candidate, and in any run-of-the-mill election she'd be well behind a generic Republican (step forward, Tim Pawlenty).

That said, the alternatives this year are worse. Gary Johnson and the Libertarians have some good policy ideas, but on balance I can't support them or a candidate who seemingly can't even take himself seriously. The Greens? I donated to, and volunteered for, the Green Party once upon a time. I voted for Ralph Nader in 2000 (albeit in Nebraska, where there was no danger of swinging the election). But Jill Stein? Wi-Fi fearing, conspiracy-mongering, more-progressive-than-thou Jill Stein? Nein, danke. My kingdom for a Green Party that can put forward serious candidates on a consistent basis and not just pop up for attention grabs every four years.

Read more »
Posted by TrooperBari at 10:47 AM No comments:

Email ThisBlogThis!Share to TwitterShare to FacebookShare to Pinterest
Labels: General misanthropy, It's all about me
Older Posts Home
Subscribe to: Posts (Atom)